Diving in Vanuatu – from awesome wrecks to remarkable reefs 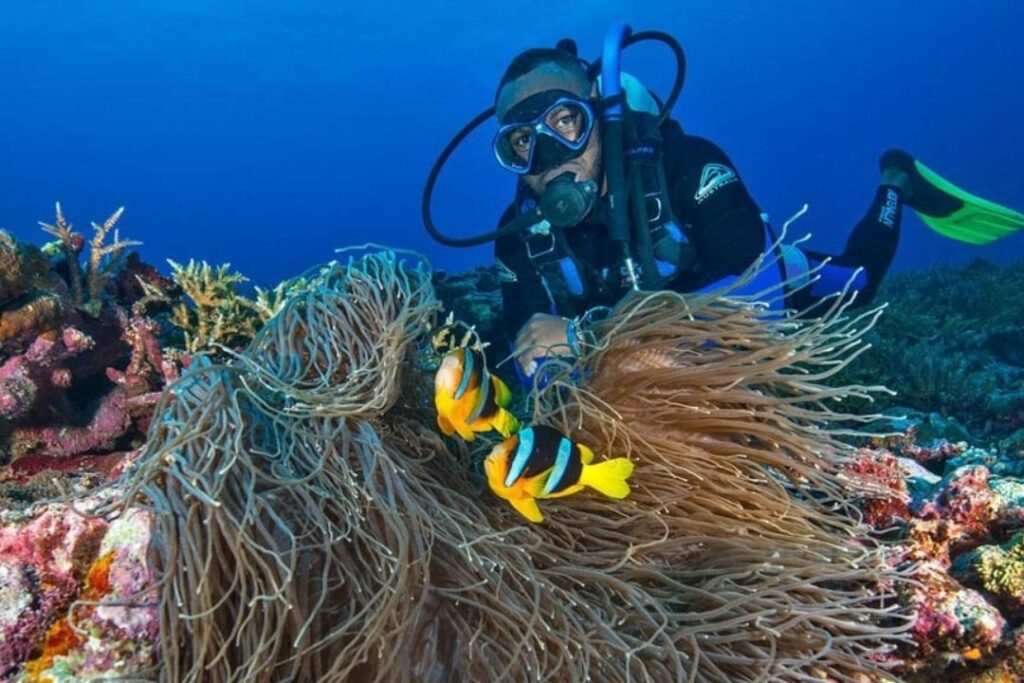 Vanuatu is best known to divers around the world for the wreck of the SS President Coolidge, but as a diving destination, there is much more to diving in Vanuatu’s underwater world.

Encircled by, and in common with, its Pacific Ocean neighbours Fiji, New Caledonia and the Solomon Islands, Vanuatu has rich coral reefs, a wealth of wrecks and some great snorkelling too. It is also home to the only underwater post office in the world. (Seriously.)

The landscape beneath the water mirrors that found above: mountainous terrain with plunging cliffs, grottoes and overhangs, huge caves and intricate interconnecting underwater tunnels and chasms formed by ancient lava flows.

This archipelago consists of 82 relatively small islands, volcanic in origin, with shorelines mainly rocky with fringing reefs, dropping rapidly into the ocean depths. This gives rise to some exciting diving on reefs and walls, as well as some excellent snorkelling opportunities, particularly on Tanna.

Vanuatu became independent as recently as 1980, being jointly administered by France and Britain, and named the New Hebrides prior to that. Being an allied territory, it supported a large American base during WWII and we have them to thank for the wrecks of the SS President Coolidge, the USS Tucker and Million Dollar Point.

There are three main regions for diving in Vanuatu; Efate (Port Vila), Espiritu Santo and Tanna. 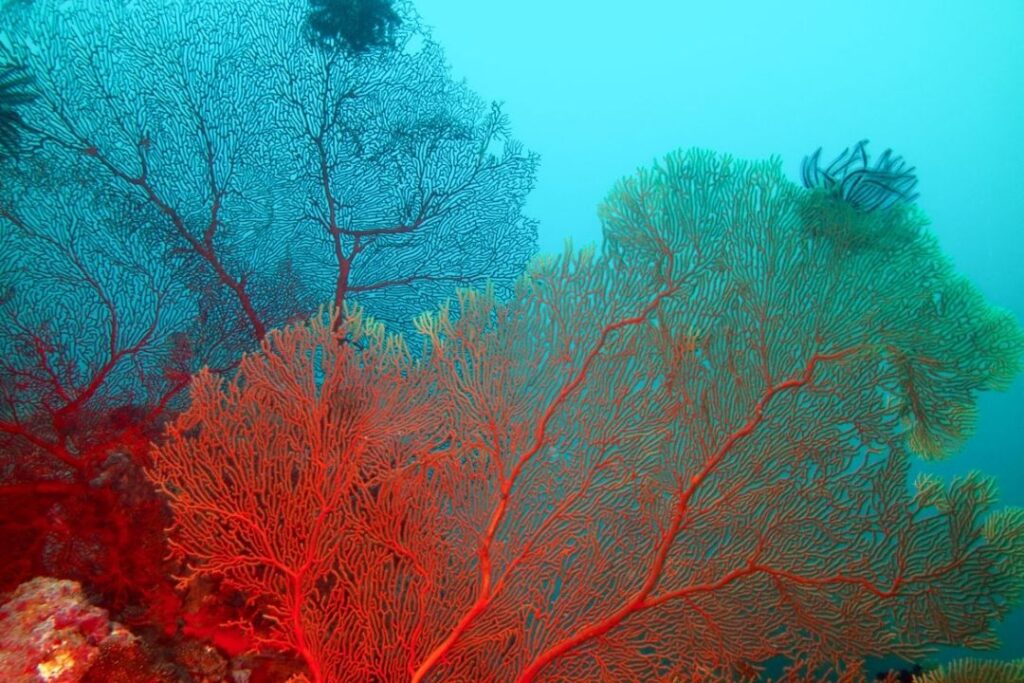 The island of Efate is surrounded by very pretty fringing reef, a few wrecks and a stunning cavern called the Cathedral, with stand-out dive sites including Owen’s Reef on Tranquillity Island and West Side Story near Hideaway Island Resort.

Diving Port Vila is easy, with a range of operators to choose from, each of which pick up and return divers to their hotels. Many of the best dive sites are only minutes away. Diving is well supervised and varied, with several wrecks, bommies, drop-offs and caverns in the protected waters of the bay.

Vila is a good place to try diving for the first time, with a Discover Scuba Diving experience, or even learn to dive and get the Open Water Certification. With operators such as Big Blue, lessons can often start in the pool of your chosen resort, before you venture into the ocean. Introductory dives at Hideaway Island Resort and Tranquillity Island are usually done in the clear, protected shallows of the lagoon.

More experienced divers can dive deeper at sites such as the Semele Federesen – the wreck of an inter-island trader which lies with its propeller at 40m, or the Cathedral, an impressive tall narrow cavern stretching down to 28m.

Other wrecks here in Vila include the 1874-built sailing ship Star of Russia, a three masted sailing ship in 36 meters of water and the ex-Qantas Sandringham flying boat Tasman. 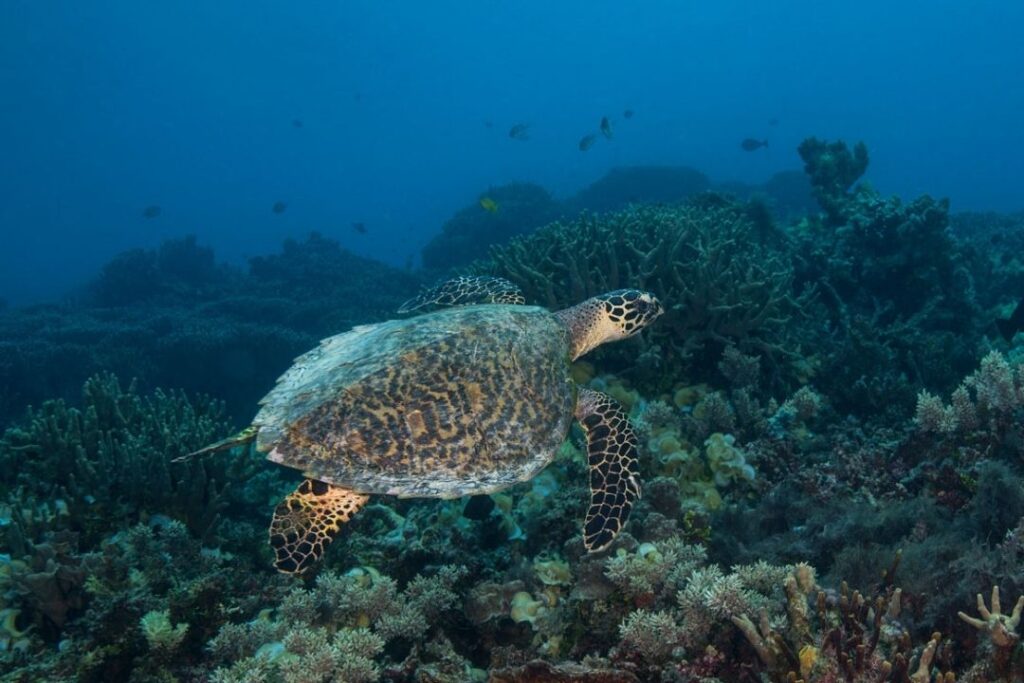 Diving Espiritu Santo is synonymous with diving the SS President Coolidge, but it’s not the only dive in town. Wreck diving options also include the infamous Million Dollar Beach and the USS Tucker, and for coral lovers, there’s plenty of fringing reefs, drop offs and coral gardens to explore.

Being home to the world’s largest, most accessible wreck in the world, Santo is popular with technical divers, using their skills to plunge the depths of the SS President Coolidge. This 33,000-tonne converted luxury liner sank during WWII after hitting a (friendly) mine, and now rests in depths of 21 to 70 metres. If you want to see the whole wreck, you’ll need around 10 dives, and technical diving allows divers more time to explore the seemingly endless corridors, hidden alcoves and cavernous cargo holds.

Other technical dive sites around Santo include Million Dollar Point where you can explore the famously dumped WWII equipment in depths of up to 50m.

Dive Centres on Espiritu Santo, including Absolute Adventures and Pacific Dive provide technical dive training and support both open circuit and rebreather technical divers, with a range of gases and equipment available for hire. 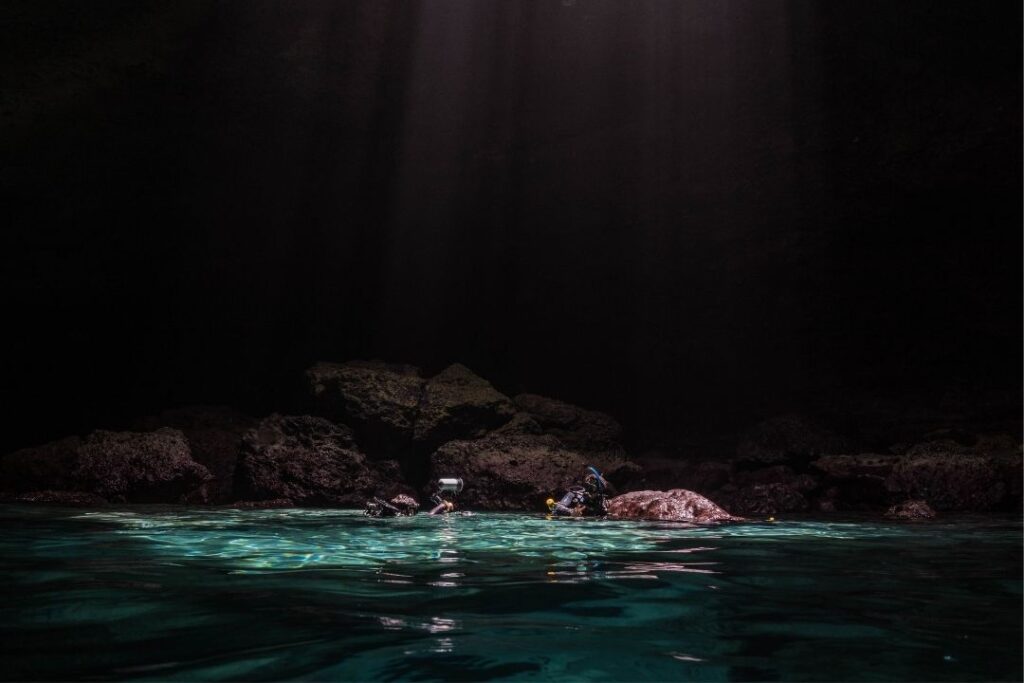 The volcanic reefs of Tanna

Diving Tanna is very different from diving Port Vila or Santo, as Tanna is a more remote volcanic island – with an active volcano. Diving Tanna, you will experience crystal clear water, colourful hard coral reefs and an amazing underwater topography of swim throughs and blue holes.

The terrain here is striking, a tall undulating coral wall covered in very healthy hard corals, that weaves in and out along the coastline revealing gullies, swim-throughs and overhangs. Reef fish flutter around the shallower parts of the reef, with nudibranchs and banded shrimps hiding among the coral outcrops.

One of the most unique aspects of diving in Tanna is the vast amount of easily accessible swim-throughs and caves. Some so small you question whether it’s possible to squeeze through, but the local dive guides at Volcano Island Divers know this fringing reef like the back of their hand and expertly weave through it.

Tanna’s Blue Cave is a famous snorkeling spot which can be entered at low tide on snorkel through a small entrance at the surface. The entrance opens up into a large cavern, lit from above through a hole in the ceiling, sunlight filtered through overhanging trees.

On SCUBA it’s even more interesting, with a swim through the fringing reef to the drop off revealing a lower cave, its entrance framed with bright red whip corals and hiding amongst the coral, a few shy ribbon eels. 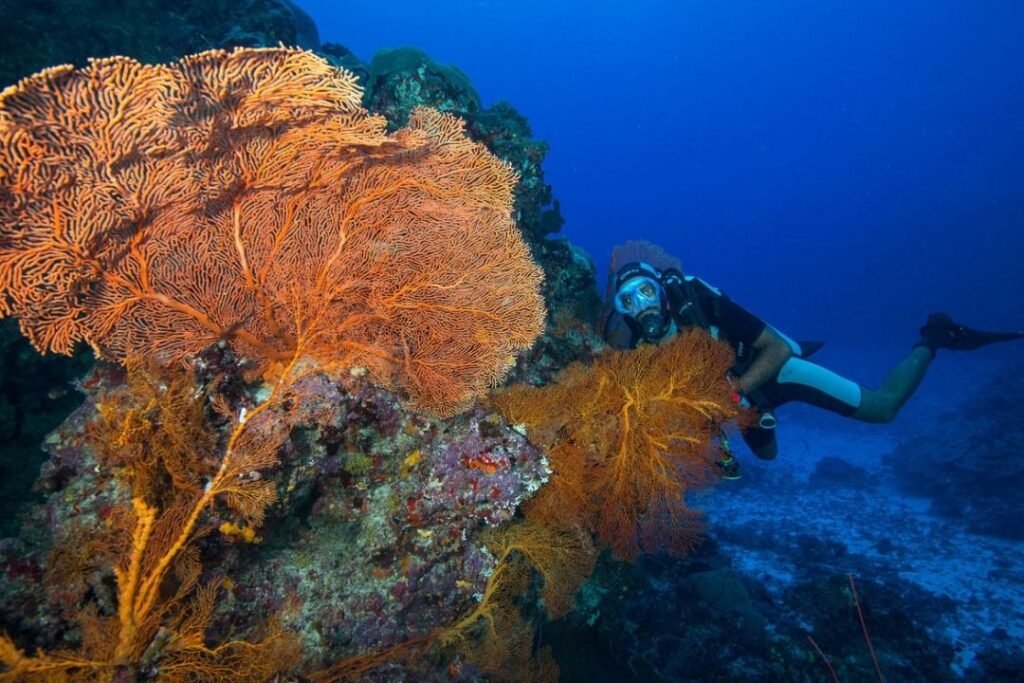 Diving in Vanuati is possible year-round, with water temperature varying between 24ºC – 29ºC depending on the season, with the warmest months from January to May and the coolest in August. There is also a distinct difference in water temperature from north in Santo, to south, at Tanna. Rainy season runs from December to March, however with steep drop offs this does not affect visibility.

Find out why diving in Fiji is the ultimate adventure playground for scuba divers here.