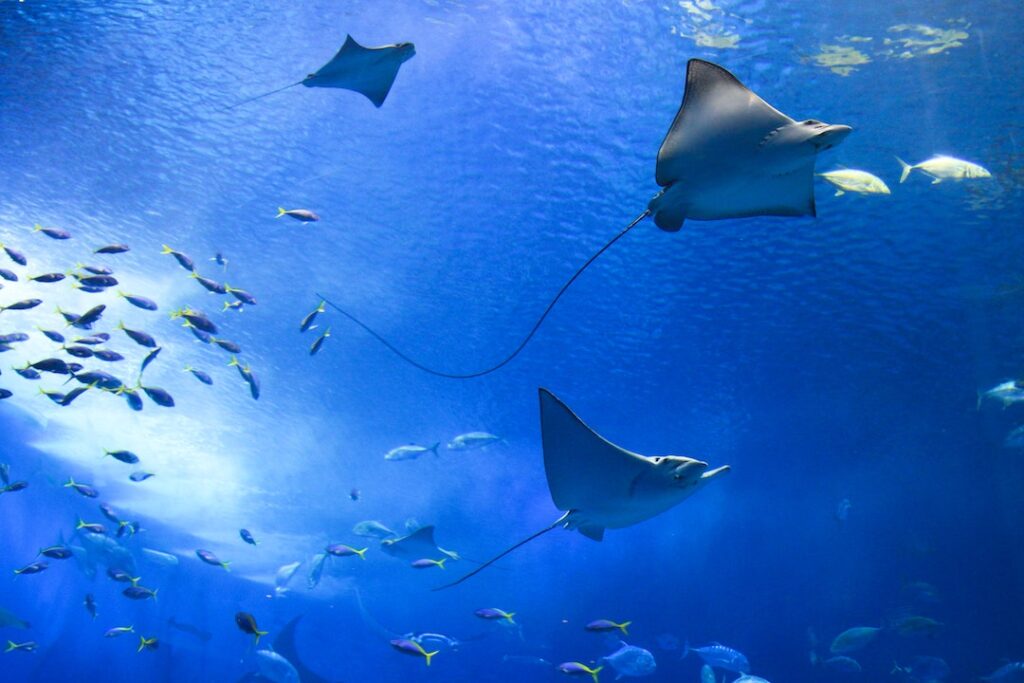 A visit to beautiful Tahiti means copious amounts of time spent in its glorious lagoons and ocean. Why not add to the experience and swim with rays?

As our boat glides across the turquoise waters of tranquil Bora Bora lagoon, it’s hard to keep our mouths closed. They just keep falling open in complete awe.

The jungle-clad mountains surrounding Bora Bora lagoon rise up to create the most verdant, magnificent backdrop, and the water is so clean and clear that it’s like watching a film of fish, reef sharks and turtles swimming by.

Bora Bora, with its strings of picture-perfect overwater bungalows snaking out across the waters, looks better in real life than it does on the prettiest of postcards.

Our group of ten is here with local Tahitian guides to swim with their beloved schools of rays, and although we’ve been told that they are harmless and as friendly as a Labrador, if you are Australian, then there might be that looming question in your mind about why Steve Irwin died after a stingray struck him.

Our guide says that it should be recognised that the stingray that killed Irwin may have been fearful of the situation it was placed in, and thus retaliated as it was provoked. Whatever the truth may be, as always, it’s best to be wary when interacting with wild animals. And these huge fish can reach up to 3.5 metres across. Our guide explains that he and his friends grew up with the rays we’re about to meet and that he and other tour providers regularly check in on them. They’re old friends, basically.

Our boat pulls up near a colourful swathe of coral, and as we all look over the edge, we can clearly see a flurry of rays gliding gracefully towards us, wings gently undulating.

Black Pointer reef sharks calmly circle our boat at a distance, but the guides assure everyone that they will keep their distance and they don’t bother humans – it’s the sardines that they’re after, that the guides are feeding to the rays.

The rays pile all over one another and rub, swim and glide all over anyone who jumps in the water. They shimmer under the sun and their oily skin makes them feel like silk. I face the bottom of the lagoon with a ray below me and it and glides along below me as I swim, seeming to enjoy the company and the game.

As soon as one leaves my side, another swims up and nuzzles me. They are everywhere, and they want as much attention as they can get, slipping over my shoulders, up from below, skirting across my belly, over my arms and through my legs. It’s hard not to laugh at the tickling sensation when they rub against you, and all sense of time disappears.

You could swim for hours with these beautiful creatures and never lose interest. When they swim above you, the goofy looking ‘smiles’ on their undersides is enough to make anyone giddy with delight.

Care for a cuddle?

Stingrays are creatures of perpetual motion, and they also tend to swim in mesmerising circles, adding to the surreal experience. This behaviour has been studied extensively, and it has been revealed that this is because it makes feeding easier – they swim in circles, tightly bailing up small fish in a school, ensuring that not too many escape, and that dinnertime is a cruisey affair.

Although many local guides touch and pet these gentle giant fish in Bora Bora, and they swim right up to you and rub against you at every chance, it is advisable to not touch stingrays, as it can remove some of the protective, slime coating covering their bodies.

These Tahitian beauties are an overly friendly bunch, as the locals have been stroking them for years, but in Hawaii for instance, all guides ask you to keep a distance, and they tend to leave the area if they’re touched.

More research needs to be done on stingrays, before we know for certain if swimming with them is causing them harm, but as with any wild creature, it’s always best to keep a safe distance, allowing them to act as they normally would in their natural environment. Saying that, it’s a tough task keeping a ray intent on a cuddle away from you!

Read more about stingrays here or check out article on the best places to go snorkelling in Fiji.