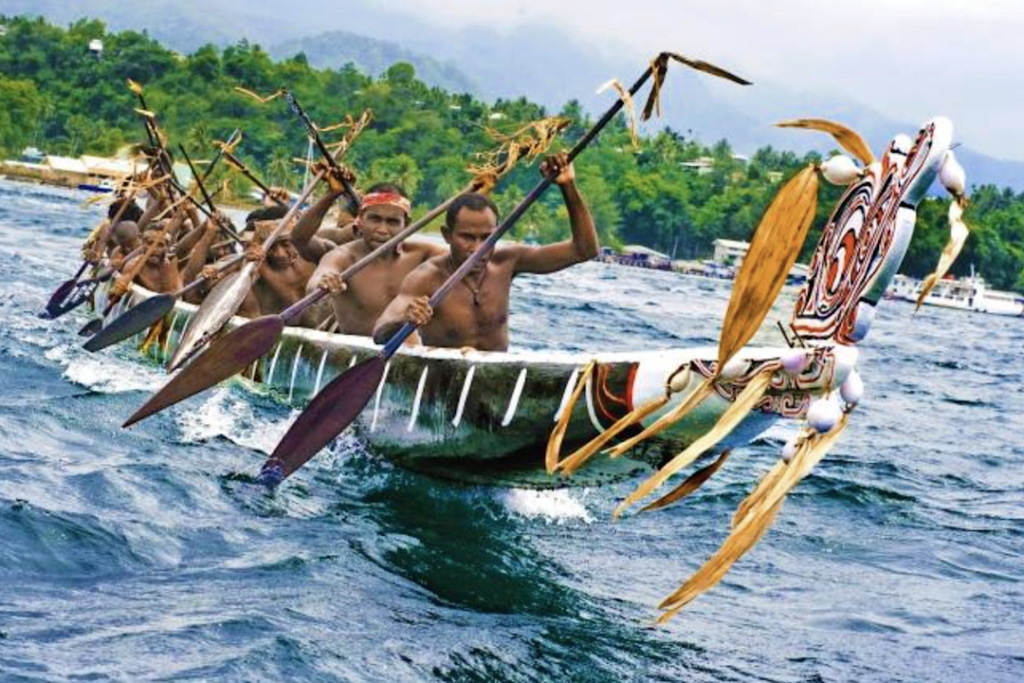 The Kenu and Kundu Festival of the Massim Isles of Papua New Guinea is a spectacular show of identity and place. Hundreds of island cultures come together to celebrate their individual diversity and honour the connections and friendships made between the isles.

The Milne Bay (Massim) province of Papua New Guinea, consisting of over 600 islands and 240,000 people is a vibrant and diverse collection of cultures. With over 48 languages, hundreds of tribal clans and a thousand different social rituals, the peoples of Milne Bay come together in a single National event. The Kenu and Kundu Festival celebrates the craftsmanship and warrior spirit of the region with a host of exhibitions, performances and a highly competitive boat race.

Though held annually on the first weekend of November, preparations for the Kenu and Kundu Festival begin far earlier in the year. The large canoes, central for the celebrations, must be formed from special timber and local wood, carved into shape under strict ritual custom and then decorated with designs befitting their crafters. When finished, these spectacular boats are twenty-foot long masterpieces of animal carvings and cultural design. Painted in vibrant colours these vessels roar their tribal pride. From the Huhu Lopo canoes tipped in white to the Kula boats from the Trobriand Islands collaged with shells… each boat is a mark of its cultural identity.

But they must also be fit for purpose. With over 600 islands partaking in the event, some ships and their crews must sail over 500km just to attend the event. When assembled at Wagawaga Island the day before the festival, hundreds of boats become a patchwork blanket of colour across the water.

The next day, the ships sail. Each bear 30-50 carefully selected men as decorative as their vessels. Painted and dressed in ornamental warrior attire, many wear feather and fauna in the form of arm bands, leg bands, loincloth skirts and elaborate headdresses. Each holds the long shaft of an oar ending in a slim leaf-shaped head. In sync, they row to the beat of the drummer sitting at the rear of their canoe.

The capital of one of the largest provinces in Papua New Guinea to focus on maritime culture and trade, the town of Alotau was a natural choice to host the Kenu and Kundu Festival and its prestigious boat race back in 2003. A sleepy sea port and fishing town the rest of the year, Alatou comes alive with tourists and spectators the first week of November. Thousands congregate on the shore to witness the war canoes arrive around the headland. Led by figureheads of majestic shape and vibrant hues, the boats seem to march across the water to the beat of their kundu (drums), their rhythm like a heartbeat.

Both Land and Sea

The arrival of the boats in the bay of Alotau is a sacred part of the festival’s opening ceremony but it is not the only spectacle for eager visitors. Performances on land are just as vibrant. Song, dance and choreographed war stories are on display, the actors whooping, calling and cheering in their native tongues. The bright face paints and feather accessories are visually stunning whilst conch shell jewellery rattles and shakes, lending to the music. Each dance is different, originating in only one of the 600+ islands to partake, and are often steeped in history. Though the performances themselves can be centuries old, the practice of them here at the Kenu and Kundu Festival is an idea taken from the 1950s when dance and show were used as a means of peaceful communication, preserving intertribal exchange and friendship.

With friendship comes food! Markets of exchange are conducted at the Kenu and Kundu, feeding tourist spectators but also strengthening the economic bonds between the islands. With money a useless commodity for many of the clans, these exchanges are only conducted materially. Piles of yams, fruit, vegetables and reed/leaf goods are shared and bartered in all directions.

But even good yams won’t keep visitors away from the big race! The hallmark event of the festival is steeped in rivalry and tribal spirit. The canoes that arrived with such flourish must put their pride on the line to race against one another. Over 600 competitors will charge across the water, their war drums blaring and oarsmen straining. The cheers of spectators are deafening and the cries of the winning team’s people even more so.

What makes the Kenu and Kundu Festival unique is the paradox of rivalry and unity that it inspires. Whilst the boat race is taken incredibly seriously by its participants and the honour of winning supreme, the Festival also emphasises the continuing connections between the Massim isles of Papua New Guinea. Whether economic or cultural, the ties that bind are built and honoured, even as the race tests those bonds with intense competition. In this way, the Kenu and Kundu Festival is a fantastic example of celebrating diversity and individual identity, whilst honouring that of others. It is a vibrant, exciting and dramatic assault on the senses that leaves no room for doubt: the Massim peoples are proud of their heritage, determined in their contests and devout in their friendships.