Into the fire at the Baining Firedance Festival in remote PNG 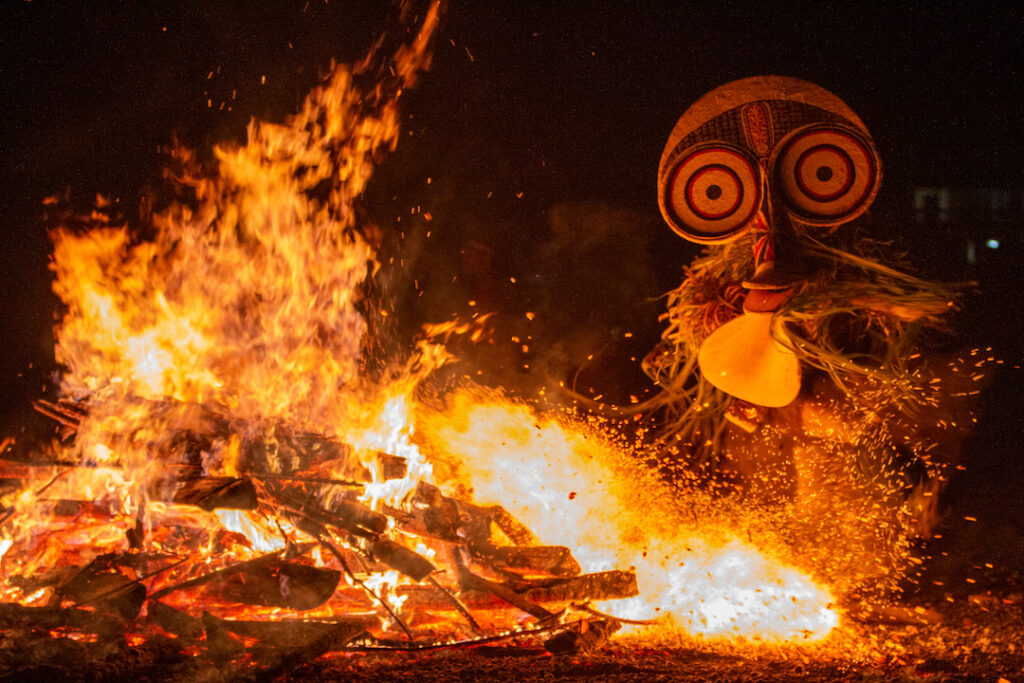 High in the mountains of East New Britain in Papua New Guinea, the tribal spectacle of the first ever Baining Firedance Festival is something out of this world.

As he crept towards me, the dog-like creature flicked his elongated claws, ominous in his stance. His torso painted white with clay and grass hair fell long down his back. While his large dog face mask was somewhat comical, his presence caused a feeling of unease as I anticipated his pounce.

He was joined by a pack of other dog-like men, stirring up the crowd as they moved around the field until a circle formed. The beat of a bamboo pole thudded against the ground from a group of men sat to the right, initiating the dance. The dog men’s menacing presence quickly turned theatrical. Moving in their circle, the pack stamped their feet to music before momentarily stopping to flex their claws and growl at the crowd.

These men were Eseng villagers, performing the Imga. The story goes – a long ago an old woman took care of many dogs, one which she named Imga. One day, she gathered her dogs at home, warning them not to wander about the bush as there was a prowling bad spirit in the neighbourhood which might kill and eat them.

As they spent their day at home, this old woman played a bamboo musical instrument to the dogs and they began to dance around. The dancing warded off the bad spirit. From that day on, the old woman taught people of the village to do the same to keep the bad spirit away.

The music’s beat quickend and whips the masked dog men into a frenzied dance with the crescendo delivering one last lurch at the crowd. Squeals of fright followed by applause from the crowd proved this performance was a favourite thus far.

As quickly as they appeared, the performers disappeared into the forest and I expressed my favour for the Imga to the man stood beside me. His approving smile turned mystifying as he whispered, “wait until the creatures of the night come out.”

Physically remote and still very isolated, Papua New Guinea is a land that is untamed and wild in beauty, while diverse in culture. What makes this culture so intriguing is the fact it still remains relatively unexplored and unexplained, allowing it to flourish untainted by outside influence for centuries.

There are an estimated 800 tribes living in the country, including some uncontacted peoples. With this comes an abundance of well-preserved culture and hundreds of diverse tribal traditions and ceremonies that are very local and utterly unique.

Through festivals and cultural displays, visitors can delve into the anthropological secrets of Papua New Guinea’s rich cultural traditions. Some of the more popular and longer running festivals include The Mt Hagen Show, The Tumbuan Mask Festival and the Goroka Show.

The newest and possibly most interesting festival is the Baining Firedance Festival. A cultural spectacle that awakens all the senses, the festival is based in East New Britain province. Held across two days, the unique cultures and subcultures on display at the Firedance Festival gives an insight into how diverse the region is. There are over 50 masked performances and each one is as exclusive as the other.

The best thing about the Baining Firedance Festival is that it is a community driven initiative, with over 1,200 performers in attendance and many more help prepare for the event. Unlike other festivals and events in Papua New Guinea where the show ground is within town, this festival takes you directly into the villages. It gives a more authentic and genuine experience.

Throughout the day, the various tribes emerged from the forest and shared with the audience their story. Giving further insight into each individual cultural performance was a man called Dr Jacob Simet, who has translated the narrative of each individual cultural group so that you could see, hear, feel and understand each performance at the Baining Firedance Festival.

Tales of secret women’s business, bravery of adolescences in initiation, harvest rituals and more played out in colourful dance and song. I witnessed tribes transform as geckos, cassowaries, lizards, frogs, birds and spirits that set my imagination alight. Like stepping into a fantasy type realm, each performance transported me into a world of mystery and often secret behaviours. There was a sense of taboo that lingered around the Baining Firedance Festival grounds, as if conjuring up the spirits that are spoken of.

With the setting sun and turn of night, the taboo became thicker in the air. This is what the day had been building up to – the Linganga or the Bainings Firedance. The dance is performed for the initiation of young boys into adulthood, to commemorate the dead, to celebrate the harvest, the arrival of a new child, a wedding and other special occasions.

Wood was stacked high on the burning fire and as the flames grew, so did the anticipation. I was surrounded by darkness with the only illumination provided by the glowing wood and fire throwing off flickering light. The drums began to beat and drew me into a rhythmic trance. I felt slightly anxious, like I was watching something I shouldn’t be. The time had come when the creatures of the night I was warned about, would soon come out to play.

The flames licked up higher into the night sky and allowed me glimpses of what was gathering in the dark. To my right sat the percussion from where the drumming sounded, about fifteen adolescent males thudding large bamboo sticks into the ground whilst chanting in unison. The beat was as memorising as watching the flames of the fire dance like spirits.

Suddenly a silhouette passed in front of the fire breaking my gaze. It was the Iarqi of the Uramat group. One by one, more Uramat appeared and accompanied the Iarqi as they capered around the fire. The excitement of their appearance simmered and I was drawn back into the beating bamboo music like a hypnotic trance. This music certainly controlled the atmosphere and the lull soon turned chaotic as the tempo increased, whipping the village into a frenzy.

The fire dancers had arrived. From the forest, they appeared, one by one, emerging from the darkness. These were the masked men of the Linganga. With skin painted black, it was hard to see any human form in the darkness, just huge elaborate masks with enormous cartoon like eyes and protruding beaks. As if stating their arrival, one by one they passed around the fire before lining up behind it’s flickering flames.

Without warning, the first dancer exploded through the fire, kicking embers high into the air. The dancers appeared to feed off music as much as the atmosphere did. In an almost trance-like state, each summoned up the courage to take turns running through the roaring fire. Every burst of sparks was as dramatic as the last, raining down like fireworks. So swift were some fire dancers that the flames followed them beyond the fire as if the spirits themselves were trying to hold onto them. Captivated by the sensory overload, I had to remind myself to breathe.

This entrancing performance continued into the night until the fire died down to just glowing logs and embers. The flames had vanished and before I knew it, the masked men also retreated back to the darkness of the forest.

In awe of what I had just witnessed, I drove away from the village engulfed by a lingering magic, with wonder of what ceremonies would continue through the night away from the eyes of outsiders. It was a privilege to witness something which until fairly recently was relatively unknown to the wider world.

Learn more about the fascinating history of Papua New Guinea by walking the Kokoda Track.