Explore the mountains of the South Island on the TranzAlpine 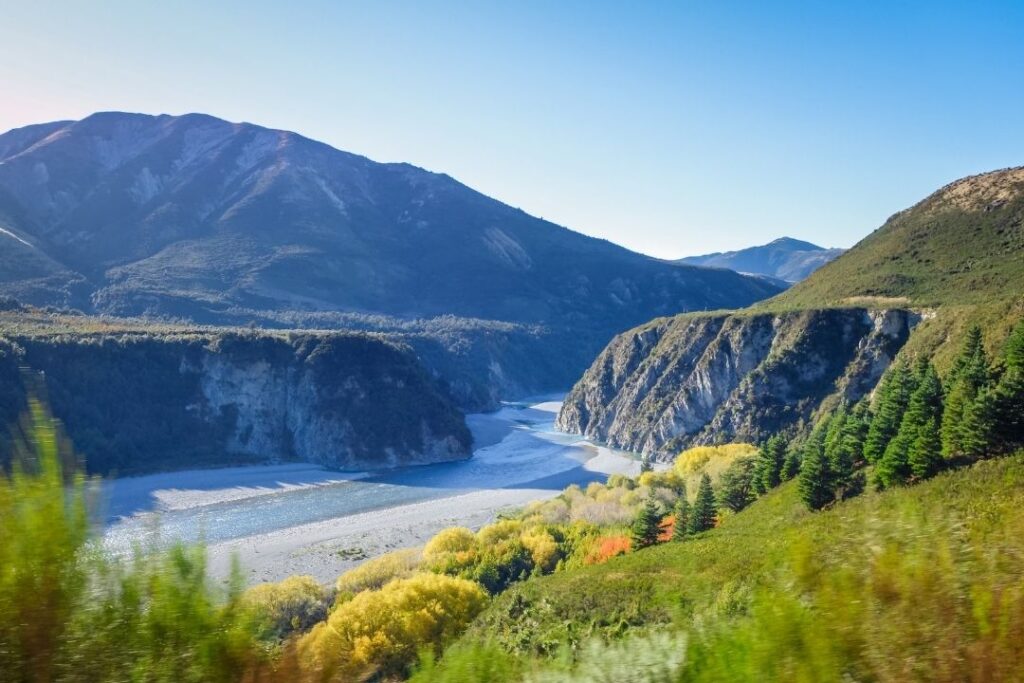 Absorb Lord of the Rings vibes on the TranzAlpine – one of the world’s greatest train journeys through a spectacular region of New Zealand.

It’s been a decade since I last visited Christchurch and I can see there’s truth in that old saying, that every cloud has a silver lining. I was last here just after the massive earthquakes of 2010 and 2011 had knocked the stuffing out of the South Island’s largest city, but that disaster has since been seized on as an opportunity for renewal. On this visit I’ve been delighted to discover thoughtful new places for people to mix: including The Crossing, a stylish fashion precinct incorporating open-air laneways; and Riverside, a vibrant modern food market with restaurants and bars.

Contrasting with these new delights are classic attractions, including the much-loved tourist tram which trundles through the city streets; and the narrow and colourful New Regent Street, a pedestrian mall built in 1932 in California’s famous Spanish Mission Revival style.

Christchurch is a city that it’s a pleasure to spend time in – but also to leave. For I’m heading to its railway station early in the morning to catch the TranzAlpine. This renowned passenger train cuts across the South Island to the west coast port of Greymouth, threading through spectacular mountains on the way.

Across the Canterbury Plains

It’s an 8.15am start so I arrive early at Christchurch Station, a pleasant low-rise modern structure dating from 1993. Finding my seat, I note that the carriages have been built for sightseeing, with big windows along each side, and smaller angled windows above them as part of the roof. Each seat comes with headphones providing a recorded commentary, so I plug in a set and get ready for the big trip to the opposite coast.

On the move and heading west, it takes the TranzAlpine some time to clear the city and its satellite settlement of Rolleston, then we’re suddenly crossing sprawling green plains. This fertile farming country is known as the Canterbury Plains, the audio commentary tells me, ancient flood plains which are now the largest open space in New Zealand. Beyond them I can see the lofty snow-capped peaks of the Southern Alps.

As the train progresses we seem to be aiming ourselves at the mountains – or more precisely, at a notch at their centre. It’s an unsettling feeling, as if you were driving a car toward a wall with only one tight opening. Again the commentary has an explanation, telling me we’ll follow the Waimakariri River for some time as a path through the rugged terrain, with numerous tunnels and viaducts to also help us progress.

The Waimakariri is a beautiful and striking waterway, an example of a ‘braided’ river whose channels divide and change over time depending on water flow. Along its high banks, greenery is contrasted with the yellow of gorse, an introduced species which is now regarded as a pest (though an admittedly pretty one).

Nearing the Staircase Gully viaduct, I head for the observation car. This carriage is open to the air along each side, with railings for safety. It’s a great place to take photos without the problem of window reflections, and to simply feel the chill mountain air whipping past as we cross the viaduct and glance down at the dizzying 72-metre drop to the stream below.

Animals of the Alps

As we reach the High Country within the mountains, I’m surprised to discover there’s farming in these heights. The plentiful natural grass allows sheep to graze, and I spot cattle on each side of the railway as we pass the former Craigieburn Station.

At Cass (“With a population of just one these days,” notes the commentary) there’s a field station that studies alpine wildlife. And beneath two mighty peaks is a narrow bridge that gives access to a sheep station, which seems an apt combination of New Zealand’s most famous farm animal and the dramatic landscapes of Middle Earth. It also seems fitting that this remote area has had many reported sightings of the moa – a long-extinct giant bird – over the years.

Downward to the coast

Passing through Arthur’s Pass National Park, our train is dwarfed by lofty mountains and the Lord of the Rings vibe is stronger than ever. After Arthur’s Pass Station, however, it’s time to descend – first via the 8.5 kilometre Otira Tunnel, an engineering marvel in itself, then along the valleys of the Otira and Taramakau Rivers. After stopping at the town of Moana, which sits on the impressive Lake Brunner, there’s just an hour left of our five-hour rail adventure.

At 1.05pm the TranzAlpine slides alongside the Grey River to the platform at Greymouth Station. This classic timber structure neatly underlines the historic nature of this improbable railway, winding its way from city through mountains to the shores of the Tasman Sea.

For an unusual and immersive experience in Auckland that all of the family will enjoy, get into the action with the All Blacks Experience.