A journey around Farewell Spit – where nature reigns supreme 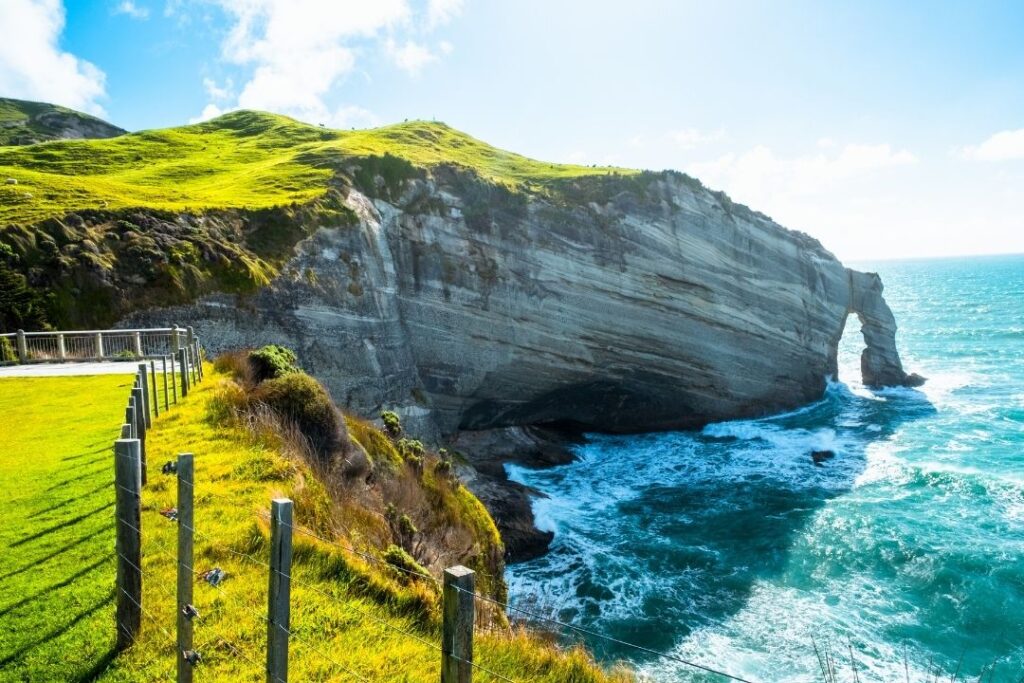 Stretching some 34km long, Farewell Spit is one of the longest natural sandpits in the world. The Maori name for the spit is Onetahua, translated as “heaped up sand”. A very accurate description of this natural wonder.

Located at the northern end of the Golden Bay on the South Island of New Zealand, the narrow spit runs eastwards from Cape Farewell, the island’s northernmost point.

It is a wetland of international importance and has been a bird sanctuary since the 1930s. The spit is home to over 90 bird species including bar-tailed godwits, knots, curlews, whimbrels and turnstones that fly around 12,000 kilometres every northern hemisphere autumn to spend the summer in the south. The spit also has a substantial gannet colony. 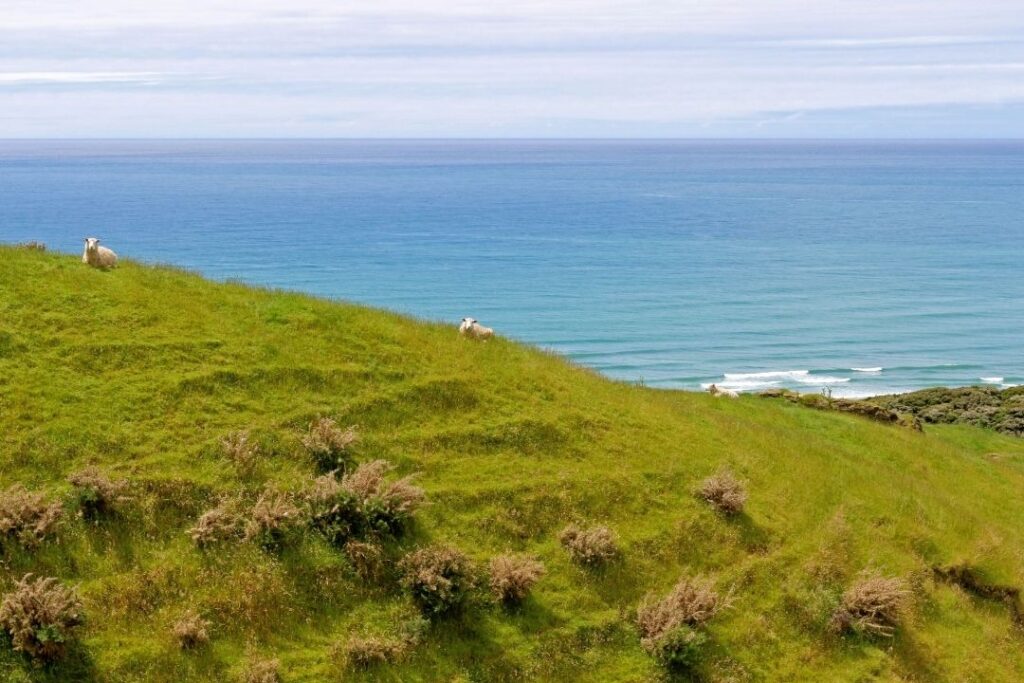 This 11,388-hectare area is a haven for wildlife and is administered by the New Zealand Department of Conservation as a seabird and wildlife reserve. Public access to the spit is restricted to the first 4km. Beyond that, vehicle access is only allowed for supervised tours by concession holders.

I joined Farewell Spit Eco Tours, which has special permission to travel beyond the public cut off point and take you into this extraordinary ecosystem with a knowledgeable and passionate guide.

The full-day tour set off from Collingwood in a large 4WD bus. I thought it was a bit excessive at first, but was soon to discover the need for the extra grunt of a 4WD.

The first stop was Cape Farewell, the northernmost point of the South Island. The weather had not been particularly kind and the wind was blowing a gale. Staring over the cliff face at the waves crashing below, the coastline seemed quite unforgiving. The dramatically sculpted quartz sandstone cliffs drop vertically to the sea, with part eroded to create a bridge-like structure. I am told the erosion of these, and other cliffs along the west coast, create the sand which is carried north to form the spit. It seemed appropriate to start my journey here, just like the sand on the spit. 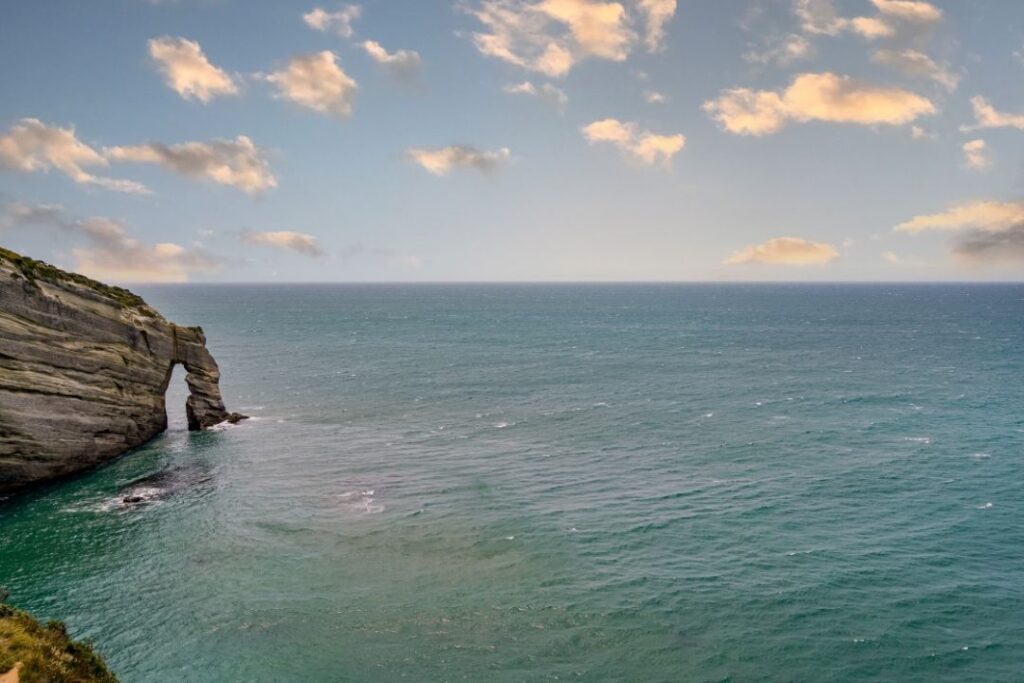 Back on the warm bus, we travelled through some lush green fields before coming to the start of the Farewell Spit area. We entered on the southern side, which faces Golden Bay. It was sheltered and largely covered with vegetation. The tide was mostly out and my guide explains that the tide here can recede as much as seven kilometres exposing some 80 square kilometres of mudflats. This acts as a rich feeding ground for the many seabirds in the area but unfortunately, is also a trap for frequently stranded whales.

Passing across to the northern side, the track became bumpy and the 4WD kicked into gear. Emerging onto the northern beach, you immediately see the difference. The wind is howling and the vegetation is sparse. The sand masses here are more recent, steeper and unstable being constantly exposed to the prevailing winds which average over 25 km/h. It is hard to believe anything could live in such a wild environment.

We drove across the sand to a rocky headland at the base of the spit in search of fossils. This area is aptly named Fossil Point and is a meeting place for ocean and land. I immediately spotted some pied oystercatcher birds strut along the surf line and noticed some big gulls hovering on the swirling air currents above. The treasures of fossils lay embedded in the rocks here and if you look closely, you’ll see small fossilised shells and worms outlined in the rock at the base of the cliffs.

Continuing the drive to the top of the spit, I noticed an abundance of birdlife. My guide explains that each year Farewell Spit attracts thousands of migratory seabirds to nest and feed on the fertile sand flats. We passed a lone seal lounging lazily on the sand dune but are soon distracted by the shout of “whale”. Eyes peeled to the horizon, a giant shape appeared on the surface followed by a spray of water high into the air that dissolves into a mist that remained for some time. It was a blue whale, identified by our guide because of the lingering blow. I have never seen a blue whale, so this moment was an absolute highlight. 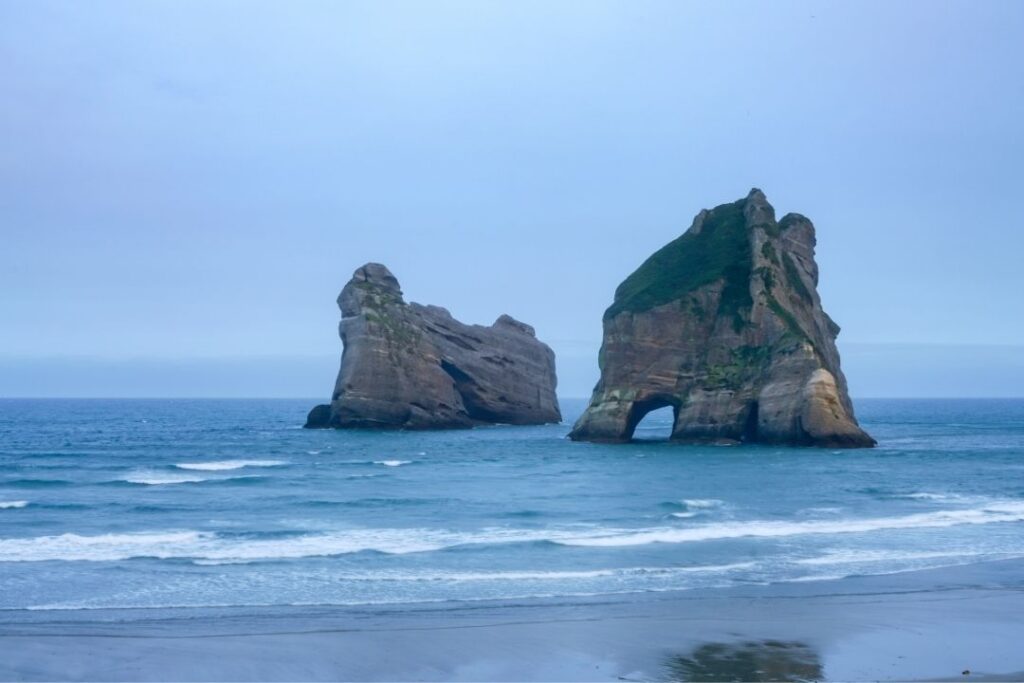 Racing the tide to avoid driving in the soft sand, we made our way up to the lighthouse. To guide passing ships, Farewell Spit’s first lighthouse was built in 1869. This historic lighthouse is located about 27 kms along the beach, almost at the seaward end of Farewell Spit. The original lighthouse was constructed of wood, but it deteriorated quickly in the abrasive sand-laden winds. So it was replaced with a new steel lighthouse in the 1890s and is still operating today. There is a small community of houses at the base of the spit that tells a story of a rich history of lighthouse families living there over time.

As the tour came to an end, it was a long drive back along the sand. I thought about the cliffs at Cape Farewell and was in awe of the journey this sand takes, shifting with the elements and ocean of time. I wonder what the spit would look like when I returned and the sands had shifted yet again.

Ever wanted to journey across New Zealand via train? Here’s what it’s like, to do exactly that on board the TranzAlpine.